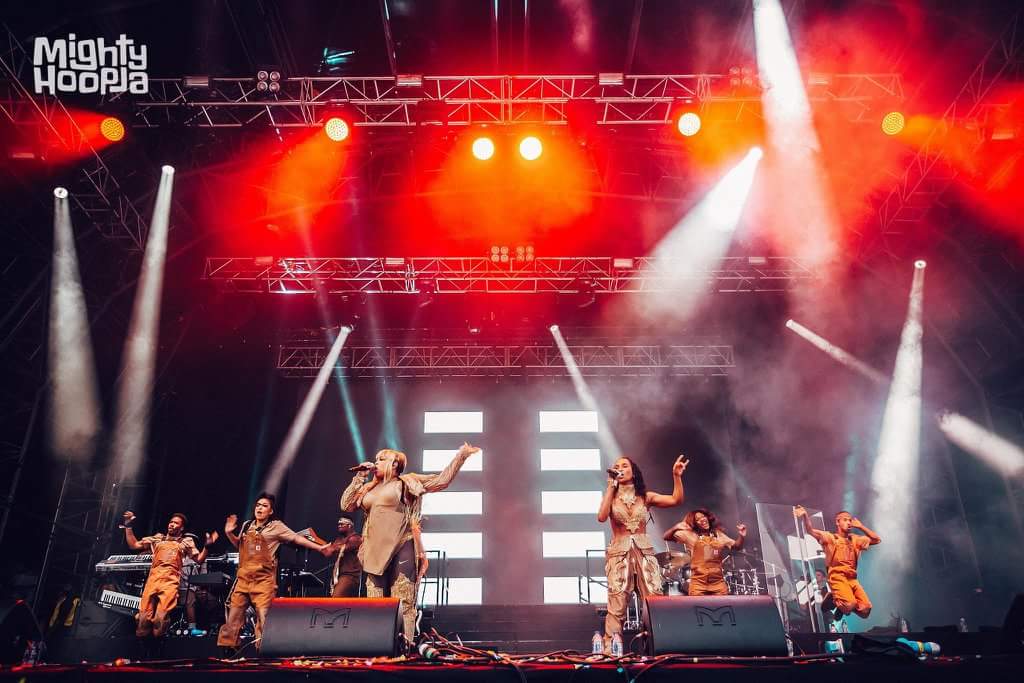 June 3, 2018: the date that became one of the most important dates of the year for most British fans of the biggest selling US girl group of all time, TLC.

Not only was it the second time TLC had performed in the UK in their 26-year career (the first show being as recent as 2017 at KOKO in London on May 9th), but this date served as the first time the ladies had performed at a UK festival, ever!

TLC had the pleasure of being chosen as the headline act at this years Mighty Hoopla festival, held at Brockwell Park in South London, which serves exclusively as TLC’s only show in the UK in 2018.

This is one of a very few occasions where a female act has been selected to headline a major music festival. Times are changing, for the better. Kudos to Mighty Hoopla for giving the girls the opportunity.

The weather held out beautifully the whole day, bringing out the best of the festival, maintaining the high spirits and eclectic atmosphere amongst the attendees.

8:30PM dawned shortly after Lily Allen’s hour long set, blessing us with the main attraction: T-Boz and Chilli, with Left Eye laced effortlessly throughout the performance, in the form of photo collages and her original raps, left to play out in her memory.

From the start, the girls, both donned in beautiful golden toned outfits, set the tone of what to expect; a powerful, high energized trip down memory lane, opening with their debut 1992 hits, “What About Your Friends?” and “Ain’t 2 Proud 2 Beg“.

They took it down a notch with the smooth “Diggin’ On You“, before upping the anté with the club anthem “Silly Ho“, slightly revamped to feature a modern beat sample from the Kendrick Lamar 2017 hit “Humble“. It went down a treat. The crowd went wild .

Rather than giving a male audience member the usual “Red Light Special” lap dance on stage, Chilli opted to invite rapper Q-Boy to dance with her during her bridge.

They took it back to 1992 with “Baby-Baby-Baby“, before diving straight back into 2017, with the anti-bully track “Haters” from their latest album.

The self-love anthem “Unpretty” came next, with the audience singing their hearts out in unison, before the girls took a short break to allow the dancers and band to show and highlight their talents.

The set features a new set of vibrant visuals, produced by the hip-hop choreography duo Nappytabs (Napoleon and Tabitha D’umo), the team behind the Jennifer Lopez Las Vegas residency and television show So You Think You Can Dance?

The opening trumpets in the Grammy winning #1 single “Creep” lit up the stage and set the tone for the excellence that followed. New track “It’s Sunny” was next, with it’s infectious chorus and Earth, Wind & Fire sample.

Chilli asked the audience if she could talk for a minute. As soon as she mentioned her frustration at guys who try to talk to her from the passengers side, the whole crowd was sent into a frenzy, as they knew it was time for “No Scrubs“!

Factors beyond their control meant their set time was delayed, therefore they couldn’t perform beyond the venues curfew, omitting the ode to the fans “Joy Ride” and “Fan Mail“.

That didn’t dent the flow of the night, as they launched into the show finalé, and Left Eye’s favorite song, “Waterfalls“, with the audience singing along loud and proud with the girls.

They bowed and thanked us all for being there, while Chilli hung around a little longer throwing love heart shapes with her hands even when the music had stopped.

One thing is for sure, after this much love from across the pond, this will not be the last time TLC will be touching down on British soils. They love us, as much as we love them.

Enjoy the full set below:

Leave a Reply to Melanie C Shares Her Time Working With Left Eye On Her First Solo Number One Record | TLC-Army.com Cancel reply