Home ›  Interview › TLC: “We Refused to Wear Dresses for Essence! Don’t Try to Change Us”
Interview

No scrubs, no dresses: The two big no’s in the TLC canon.

The pioneering girl group was catching fire with its quadruple-platinum debut, “Ooooooohhh … On the TLC Tip,” when the trio was offered the cover of Essence magazine.

“We were so excited that they wanted to put us on the cover, but they wanted us to wear dresses,” Rozonda “Chilli” Thomas recalls. “We said, ‘That’s not how we dress; that’s not our style.’ We were hoping we could work it out.

‘Since you like us, then put us on the cover the way we are and don’t try to change us.’ I remember being at the photo shoot, and I didn’t see anything that we would wear and it didn’t work out. We ended up passing on that.

“Thank God we did,” Thomas says after a brief fit of laughter, noting that TLC was never again offered an Essence cover, “because there’s so many females out there who don’t feel comfortable wearing dresses, but you’re still feminine. Just because you’re a girl doesn’t mean you have to wear a dress every day.”

Now, a group’s sartorial preferences might not seem like a big deal, but 2½ decades ago when TLC made its debut, that refusal to be marketed like all the other female vocal groups before, to define its femininity on its own terms, was a bold, resonant move.

By favoring bright baggy T-shirts, loose-fitting shorts, backward ball caps and condom eye patches — at least in the case of rapper-singer Lisa “Left Eye” Lopes, who died in a car accident in 2002 — these self-professed “prissy tomboys” broadened the scope of feminine beauty and sex appeal within the musical mainstream.

This was no small thing, with TLC encouraging its gargantuan female following to embrace their idiosyncrasies, be comfortable in their own skin no matter their size or shape, or if they preferred tent-sized jeans to tight skirts. TLC’s songs doubled down on this message.

Not only did TLC sound different with a smooth, new blend of pop, R&B and hip-hop — with the buttery, soulful singing of Thomas and Tionne “T-Boz” Watkins buoyed by Lopes’ sharp, needle-voiced rhymes — but the group’s message was just as fresh. This has remained the case throughout TLC’s career, with songs about dressing the way you want (“Hat 2 Da Back”), not looking to men for validation (“Unpretty”), and brazenly expressing your sexual desires (“Ain’t 2 Proud 2 Beg”).

Along the way, TLC delivered tune after tune posited on female independence long before Destiny’s Child turned doing so into a cottage industry.

The Spice Girls may have turned “girl power” into a motto of empowerment in the mid-’90s, but it was TLC who first spread that sentiment all over the pop and R&B charts years earlier.

“We were just happy to get out there and be ourselves,” Thomas explains, “say what it was we wanted to say, how we felt about things, the importance of independence and being secure with yourself. That’s just how we were.”

Thomas knew early on that TLC had something unique.

She recalls another early photo shoot, for TLC’s first record, where the group’s potential really struck her.

“I think I was mad at them that day, didn’t even want a shoulder to touch mine,” she recalls, “but I looked at the pictures and I was like, ‘Oh, my gosh, this chemistry is crazy.’ I told them, ‘We’re going to be the biggest girl group ever.’ They’re just looking at me like, ‘OK.’ ”

With 65 million records sold, TLC is the top-selling American female vocal group of all time.

Last summer’s “TLC” added to that tally. The group crowdfunded its fifth album, and first in 15 years, making it without any direction from a record label.

TLC set the Kickerstarter record by reaching its $150,000 goal in less than 48 hours, ultimately raising $400,000, with donations from musician fans such as Justin Timberlake, Katy Perry, New Kids on the Block and Bette Midler.

In a way, TLC has come full circle.

Back in 1992, the group first made a name for itself by fighting to do things its own way.

All these years later, they’re still not wearing dresses.

“We’re not afraid to do some things that most people aren’t doing because you never know what’s going to happen,” Thomas says.

“It may not be successful or you may get a lot of backlash,” she adds. “But that’s been our whole career.” 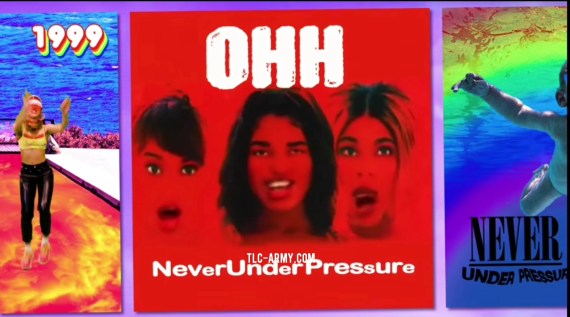