Last year when TLC were doing the promotional rounds for their new album, they revealed the record had 2 guest features, but the final tracklist only featured one guest, Snoop Dogg (on ‘Way Back’).

This had fans wondering who that missing guest feature could have been. J. Cole? Drake? Lil Mama? Well, it was none of the above!

Finally, T-Boz has put all speculation to rest! She exclusively told Daniel S. Bahrami for Loverboy Magazine that the guest feature was none other than Missy Elliott!

“Oh that was Missy Elliott!“, T-Boz exclaimed when asked about the mystery feature. “I love her dearly, but it was just a matter of politics taking too long. We needed to put the album out for the fans. I want to make it clear – it had nothing to do with her! I’m glad we are free from all that industry stuff now. I don’t have the patience.“

During the interview, T-Boz answered a lot of questions fans have been wondering.

“Yes, the European fans definitely will get to see more of us. I don’t know why we didn’t go there before. I know some plans were postponed. We’re rescheduling that now.”

“Honestly, I’ve never separated people like that. I love our LGBTQ fans, but I don’t look at it like, ‘We have two different fan groups. Those are my gay fans, and those are my straight fans.’ If I can touch people with my music, then that makes me happy. From the get-go I’ve always told people to be themselves and stand up for themselves. I guess that resonates more with the LGBTQ community and I’m all for that. People need to be cool in their own skin.”

“[Appearing on the show] That’s totally up to them. I would definitely come! Helloooo! I would love to be a judge and I personally love RuPaul. We worked with his make-up artist, Mathu Andersen, on the ‘No Scrubs’ video. I specifically asked for someone who knew how to do drag make-up, because I’ve always been so mesmerised by it. I wanted that kind of make-up and Mathu was perfect.”

“One thing we are working on is a Las Vegas residency. We are also doing ‘T-Boz Unplugged’ on 14th October in L.A. It raises awareness and funds for kids growing up with sickle cell. It’s at Avalon. You can find out more and make donations at www.tbozunplugged.com. It’s awesome because the foundation teaches kids about holistic remedies and acupuncture, not just being on all that medication which keeps us in a weakened state. Also how to build your up body, in an organic way.”

Check out the full interview HERE 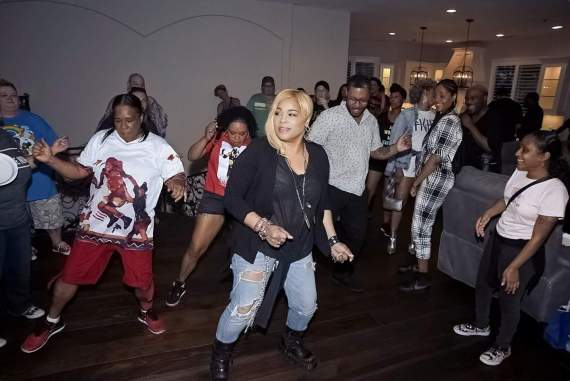