TLC with choir performing the ‘Waterfalls’ finale at KOKO in London

TLC, the biggest selling girl group in the United States, have always been known to put on pure high energy, fun and entertaining performances, as evident in the majority of their music videos, highly acclaimed television award shows and live concerts in countries around the world such as Japan, Australia and their own country in the US, but never in the UK, until now!

British fans have patiently waited 25 long years for the legendary girl group to step foot in the United Kingdom for a live concert, and I can proudly say they were absolutely worth waiting for!

Although, personally, I have had the pleasure of experiencing a TLC live concert in the past (I previously travelled to the States to see the girls do their first show without Left Eye in 2003 at Zootopia at Giants Stadium, New Jersey and attended their first ever Australian tour in the summer of 2014), it was important to me to experience the magic of a TLC show in my own country, so the ladies can prove to the rest of the country exactly why I adore them so much. And they did not disappoint, they actually exceeded my expectations and were better than ever!

Whilst most TLC fans are used to the girls performing 45 minute sets, being part of a various artist line-up, this was a sole headline TLC show, and that gave them even extra stage time, so to my delight the ladies gave us 75 minutes of back-to-back hits and an exclusive first time performance of some of their new songs to give us all a taster of what to expect from their upcoming self-titled 5th album, which will be available on June 30.

After an enthusiastic introduction from their regular DJ and hype man Benny Demus, the TLC beauties T-Boz and Chilli emerged onto the stage, both donned in stunning golden outfits, to the exciting sound of trumpets, a full live band and 4 dancers, as they opened up the show with the spectacular live mix of their hit single ‘Diggin’ On You‘, a very nice surprise, and another first for the girls!

The ladies quickly upped the tempo of the show, as they dived straight into their early hits and performed ‘What About Your Friends‘ and ‘Ain’t 2 Proud 2 Beg‘, complete with Left Eye‘s original raps blasting out of the sound system as the fans sang along, word for word, all proud to honour Lisa in the best way they knew how!

After taking few moments to greet the audience and remind everyone that this was their first time performing in England, they got the crowd chanting and whooping as they performed the club smash ‘Silly Ho‘, followed by the seductive ‘Red Light Special‘, where Chilli pulled a lucky male fan on stage for the infamous red light special lap dance!

‘Baby-Baby-Baby‘ followed shortly after, along with the self love anthem ‘Unpretty‘, before the ladies took a short break and let DJ Benny Demus entertain the crowd for a short period. The girls returned and launched straight in the classic ‘Creep‘, to many cheers and excitement from fans, who sang along and danced along with the iconic dance routine.

They then launched into one of the many highlights of the night, the live concert debut performance of the superb new track ‘It’s Sunny‘, penned by Rose Gold and Ron Fair. Sampling ‘September‘ by Earth Wind & Fire, the trumpets rang throughout the uplifting joyous song as T-Boz and Chilli performed the song together with an energetic dance routine to go along with it.

The current and first single from the album, ‘Way Back‘, came next, with a cool stripped back instrumentation, bringing out the essence of the song and the live band complimented the track brilliantly. This was the first time TLC had performed the single, and they satisfied us effortlessly, even including Chilli’s beautiful bridge verse which wasn’t featured on the single release, but will be available on the album as the ‘Extended’ version.

The Drake favourite and fan dedicated track ‘Fanmail‘ was performed next, taking us all back to the pre-millennium futuristic era of music. Fans chanted Lisa’s ‘fanmail’ lines during chorus while the girls danced hard along with the dancers. After proclaiming their love to the fans, they performed their 2013 song ‘Meant To Be‘, the Ne-Yo produced track which was made for their biopic ‘CrazySexyCool: The TLC Story‘. Chilli allowed one of their superfans Carl to say Ne-Yo’s ‘TLC’ line into her mic at the start!

After taking a short break while DJ Benny Demus introduced the audience to each individual member of the band and the dancers, TLC returned to the stage and launched into their uplifting, anti-bully anthem ‘Haters‘. The catchy, sing-a-long track had fans singing and chanting along with the girls, throwing their hands in the air and dancing, before the crowd went wild for the worldwide smash ‘No Scrubs‘!

The girls thanked the crowd and left the stage, prompting fans to chant ‘TLC!’ continuously until the girls re-emerged for an encore and performed the sentimental song ‘Joy Ride‘, which they have dedicated to fans. ‘Thank you for staying by my side/ hope you all enjoy the ride’ the ladies sing on the super sweet and uplifting song.

To close the show, TLC performed one of their most iconic songs to date, ‘Waterfalls‘, which is also Left Eye’s favourite song. The girls requested for the lights in the venue to be dimmed and that fans use their phones to light up the room in honour and memory of Lisa.

In a poignant moment, Lisa’s rap verse was given an almost acapella treatment with minimal beats, while the girls and dancers gave their all during the choreography. A choir then graced the stage to perform the final chorus with T-Boz and Chilli. Fans screamed and cheered as the girls bid their farewells and promised to return in the future!

In all, TLC’s debut show in the UK was a phenomenal event. The show was perfectly executed and well planned and the songs had all been reinvigorated with extra beats and a full live band added that extra touch of class, in addition to the high paced energy delivered by the dancers and the talent and charisma of T-Boz and Chilli kept fans interacting and interested the entire time.

The show sold out in a record breaking 2 minutes on the day tickets went on sale in March, a clear sign the ladies are very much in demand in this part of the world. In fact, Europe in general is craving a piece of TLC history – fans from as far as Germany, France, Poland, the Netherlands and even the States all flew into London specially for the TLC show. The girls have promised to be back for more dates in the near future, something I’m sure we will all be looking forward to.

Eager fans decided to wait for hours outside for the girls after the show for another glimpse of the legends, and they both took time out to greet fans for selfies before they went home. Just a prime example of how down to earth, loyal and humble these ladies are; a total class act.

Order “TLC” the self titled album, out now. Released on June 30 includes the singles ‘Way Back’, ‘It’s Sunny’ and ‘Haters’, plus, ‘American Gold’, ‘Scandalous’, ‘Aye Muthafucka’, ‘Start A Fire’ and ‘Perfect Girls’. 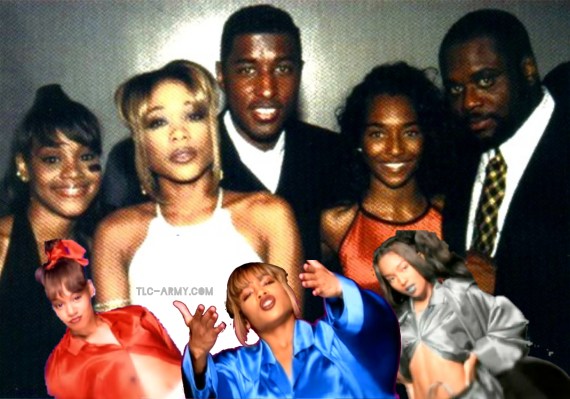