IN 1992 before No Scrubs, Creep and Unpretty made them the biggest- selling girl-group in US history, TLC were offered a huge opportunity: their first TV performance, singing debut single Ain’t 2 Proud 2 Beg on phenomenally successful US show In Living Color.

Tionne “T-Boz” Watkins, Rozonda “Chilli” Thomas and Lisa “Left Eye” Lopes were wearing condoms pinned to their clothes as fashion accessories – a deliberate attempt to make it more acceptable for kids to buy them in stores.

When the TV show’s producers told TLC they’d have to remove those accessories, the band refused. “We just said no,” remembers Chilli a quarter of a decade later in a presidential suite of London’s The Landmark hotel, having two days earlier played what was, quite improbably, TLC’s debut UK show.

“They said if we didn’t take them off, we couldn’t perform. This was our first ever TV performance, and we turned it down. Then we got booked for The Arsenio Hall Show instead, which was bigger.” TLC’s career has been defined by bold moves. When label supremo Clive Davis said he didn’t think a song called Waterfalls should be a single, the band refused to take no for an answer. “We wrote a big poster with a marker – ‘Please believe in us’ – and delivered it to his office,” T-Boz recalls. She pauses for dramatic effect. “Biggest song to date.”

Then there was the time a few years later, when LA Reid played them a demo he’d received from Sweden. “We knew it was a hit sound but it didn’t fit us, and we wanted to own our sound,” T-Boz states. They rejected the song; …Baby One More Time went to another artist. “Nothing about that song sounded like a TLC record,” continues a defiant T-Boz. “You just have to know what kind of artist you are.”

TLC HAVE never been confused about what kind of artists they are. “We were voices for women, period,” is how Chilli puts it today. “Especially in the way we dressed – we’re not a tight clothes type of group, with stilettos. There are so many women out there who don’t feel comfortable dressing like that, and when we came out we represented them. We were their voice too, from the very start.” In the late-’ 80s, Atlanta’s music scene was electrified when LA Reid and Kenneth “Babyface” Edmonds chose it as the base for LaFace Records.

“You thought, growing up, that you’d have to live in New York or LA to make it,” Chilli explains. “Not right there in Atlanta, Georgia. When LaFace came they gave so many opportunities. It was BOOMIN’! LaFace Records, that’s where it all started.”

In theory TLC were a manufactured girl-band formed around the talents of a singer called Crystal Jones but T-Boz and Left Eye staged a typically spirited pop coup: Jones was ejected and in her place came Chilli.

Immediately, there was a spark. “I saw it before those other two little rascals saw it,” Chilli smiles. “It was there in our photoshoots from the very beginning. I’d look at Polaroids during the shoot, and maybe that day I didn’t like her [motions to a sceptical-looking T-Boz] or I didn’t like either one of them, and I didn’t want her shoulder to touch my shoulder. Then I’d look at the Polaroids and I’d just see CHEMISTRY. You can’t create chemistry, it’s either there or it’s NOT. That’s just the truth.”

Chilli first felt like TLC had made it when the band picked up their first MTV Viewers’ Choice Award; for T-Boz the moment came when they received diamond certification representing 10m units sold of 1994’ s CrazySexyCool. They proudly remain the only female group ever to achieve diamond status and when Q suggests that freefalling sales mean no band is ever likely to catch up, T-Boz’s response of “that’s so sad” is impressively close to being convincing.

Both also whoop with delight at the mention of their first live dates supporting MC Hammer and it was Hammer, T-Boz adds, who took time out backstage to tutor TLC in how the music industry worked. “He put us on to how we weren’t getting the right amounts,” she recalls. “We sat in that hallway for three hours one night, and we just learned so much. It was a world we didn’t know existed. It was as if – BING! – the lights came on.” But one day a few years later, the lights literally went out.

“I was sitting at home,” T-Boz begins, “when my lights got cut off. And I couldn’t afford to turn them back on. I just thought: ‘Huh? But we’re the number one best-selling girl-group of all time!’”

The band had suspected for a while that they’d signed an unfavourable contract through their original management company. But in 1995, at the height of their commercial success, they would find out just how unfavourable it really was. “We knew we had issues and that’s why we kept asking to see it [ the contract], and we were going to correct it,” T-Boz adds. “Then we realised: ‘Woah, we’re really in trouble here. We were about to go bankrupt.’”

Having been paid far less than anyone would reasonably expect a multi-platinum band to have received, TLC were $ 3.5m in debt. “We actually had to borrow money to go broke,” T-Boz exclaims. “We had to borrow $ 45,000 –$ 15,000 a piece – to file for bankruptcy. You have to pay to go bankrupt! Picture that! Ain’t that something else?” That, Q suggests, simply doesn’t make sense. T-Boz: “THAT’S WHAT WE SAID!”

IN APRIL 2002, during the recording of the band’s fourth album, Left Eye was driving in Honduras when she swerved to avoid a truck, crashed her car and was killed. Her last work was posthumously featured on that fourth album, 3D, but it was a year before T-Boz and Chilli would return to the stage at a stadium show near New York. “This was the first time we had to be on a stage, professionally, without our sister,” is Chilli’s recollection. “That was tough. We never looked at the screens that were showing her image. We couldn’t do that.” It was no secret that prior to Left Eye’s death there had been tensions in the band.

The group’s financial difficulties had been compounded by the fallout of Lopes inadvertently burning down her boyfriend’s house; musically, Left Eye felt her contributions to the group’s music were being incrementally sidelined.

At the tail end of 1999, as the band were wrapping up promotion on FanMail, the album that had spawned No Scrubs and Unpretty, Left Eye sent an open letter to Entertainment Weekly. She wrote: “I challenge Tionne “Player” Watkins and Rozonda “Hater” Thomas to an album entitled The Challenge. A 3CD set [consisting of] three solo albums.” “We were surprised,” Chilli remembers. “It didn’t shock us that she’d do something like that, but a lot of our fans got mad at her. Like, ‘Are you trying to divide and conquer?’” T-Boz and Chilli refused the challenge.

“Think about a child when they’re throwing a tantrum,” T-Boz says today. “You pay them no attention, what do they do? Stop. And she did. You can’t fight the world when you’re not unified.”

It seems unlikely, but the band insist today that had Lisa not died, TLC would have stayed together. She would, they add, have been with them two nights ago, onstage in London, and after having discussed it a few years ago they’re still toying with the idea of bringing her back as a hologram for their live show, and they’re particularly keen on the idea of making that happen during a Las Vegas residency.

The last decade has seen a Greatest Hits featuring new material, a biopic, a TLC-themed talent search, frequent reappearances in the charts thanks to their songs appearing in shows like Glee, and work with other artists, like the song T-Boz wrote for Little Mix.

TLC have also continued to perform live, but in January 2015 they had an idea for new material. For their fifth and final album, they’d avoid major labels and hit Kickstarter instead. Along with promising copies of the finished album, they offered crowdfunding rewards like a workout class with Chilli (for a $2000 pledge) and TLC slumber parties (for $5000). They smashed their $125,000 goal, pulling in almost half a million dollars. Then everything went quiet.

The proposed September 2015 release date came and went; by 2016 fans thought their money had simply disappeared, and trolled the band with the hashtag #tlcgoingtojailparty. “The mistake was we should never have given a release date,” T-Boz laughs. “But that [reaction] was stupid! All the good we’ve done in this industry, now social media’s here they just want to be messy. Not just quite messy – beyond messy.”

Flash forward to 2017 and the album is here. One of the final steps of the people-powered comeback involved asking fans to help name the album, the spectacular upshot being that the new TLC album has ended up being called… TLC. “We kinda, you know, we knew what we wanted,” Chilli grins, and by this she seems to mean that the band had pretty much decided on the title anyway.

The new album isn’t exactly wall-to-wall No Scrubs but the tunes are perky, those TLC vocals are as spectacular as ever and Perfect Girls stands out as something of an Instagram-era companion piece to Unpretty, which in 1999 saw the band exploring issues of self-worth long before self-worth became just another marketing angle.

“You can never say that stuff enough,” T-Boz shrugs. “It’s a new generation with social media. Girls are chasing a goal that’s just not there. Today – and I hate to say it – but it’s the day of the ho.”

“Hos,” Chilli adds sombrely, “are winning.” “Day of the ho!” T-Boz says again. “‘Woooo! I can’t wait to grow up to be a stripper!’ I’d never want to hear my daughter say that. What you gonna fall back on? Cos even with fake body parts, gravity comes!” At this point, T-Boz and Chilli start wildly gesticulating at various body parts. “It’s comin’ on down!” Chilli exclaims. “Age comes too!” T-Boz shouts. “It’s gonna come oooon down.” Chilli: “All the way down!” T-Boz: “Where the waaater runs deep!” Chilli and T-Boz fall about laughing. They high-five each other, then they high-five Q, then they stamp their feet and high-five each other again. The chemistry Chilli saw in those early Polaroids is here in the room, where, over a quarter of a century later, she and T-Boz are still shoulder-to-shoulder.

“We have a glue that is just authentically there,” Chilli smiles as our time together draws to a close. “We looked at it, and we still do, as a marriage – but there’s no divorce here. We’re stuck together forever, whether we like it or not!” 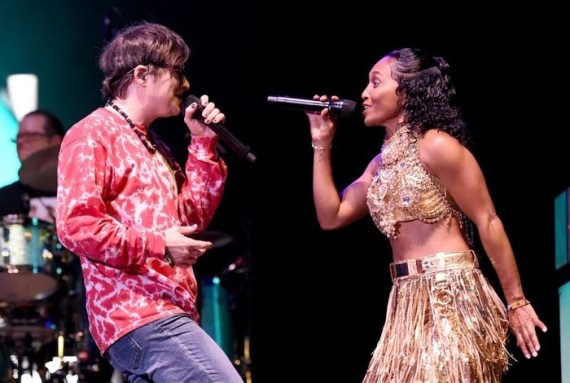