TLC: ‘We’re smart enough to understand what people love about us’

TLC: ‘We’re smart enough to understand what people love about us’

By Shaun Curran for iPaper

I’ve just asked the members of TLC whether, like the lyrics to their 90s megahit “No Scrubs”, they can spot a sleazy, good-for-nothing scrub coming from 10 yards.

“Absolutely!” “We have a scrub-dar! It works most of the time. We know!”

We are crammed in a Portakabin backstage at south London’s Mighty Hoopla festival, a pop extravaganza that TLC will headline tonight.

They’ve just come from Paris (“We had fun, oui oui, oui oui”) and despite getting on site just minutes ago – when I first arrive, Watkins is putting eyelashes on, Thomas is doing her hair – I feel like I’m in the presence of a well-honed double act: a brash one (Watkins) and a quieter one (Thomas), they finish each other sentences, nod in enthusiastic agreement (mostly) and show the chemistry that 25 years as America’s biggest girl band dictates.

Initially a trio with Lisa “Left Eye” Lopes, just how big TLC became in the 90s is difficult to quantify. There are the bare statistics – £65m record sales worldwide, second in girl group terms only to the Spice Girls, alongside 56 different awards, including four Grammys and one Brit – but their influence sprawls to the present day.

TLC’s message of female empowerment couldn’t be more relevant in 2018, while their blend of sultry R’n’B and hip-hop still impacts the charts: Ed Sheeran had to pay royalties to the writers of “No Scrubs” for the similarities between the track and his song “Shape of You”.

Their first-ever UK show at London’s Koko last year sold out in two minutes; a Kickstarter campaign to fund last year’s self-titled comeback album doubled its target in two days, with Katy Perry among the financial contributors. And, seriously, who doesn’t like TLC?

Afterwards when I mention the interview to my Uber driver, he starts singing their biggest hit “Waterfalls” and even mentions Thomas by name. It was juggernaut-level success that the band was initially too busy to recognise.

“It was only when we started seeing people faint or cry and saying they didn’t commit suicide because of something we wrote or sang or said,” says Watkins. “That’s kind of deep.”

Yet success was blighted every step of the way: they had to fight record company LaFace to get “Waterfalls”, which catapulted their 1994 album CrazySexyCool to 14 million sales, to even get heard. “[LaFace founder] Clive Davis didn’t believe in it,” Watkins says.

“It’s funny how after you do something the person who didn’t believe in you is like: ‘I knew it was going to be great’.” Personal problems constantly threatened to derail them. TLC were declared bankrupt in 1995; at one point, relations between the three were so bad that Lopes, feeling underused and underappreciated, challenged Watkins and Thomas to make solo albums, with a $1m prize for the winner.

When Lopes died in a car crash in 2002, seven months before underwhelming fourth album 3D, TLC’s reign at the top was over. “That was the hardest time,” recalls Watkins. “We were still in a zombie state because we were still in mourning.

The record company were like: ‘You have to put the album out,’ so that was the first realisation she wasn’t there. “That was a hard time. It was real awkward. Because we weren’t ready. And that whole album just looks sad to me now I look back.” Thomas nods in agreement.

It makes TLC’s comeback nearly 20 years after their heyday somewhat unlikely. Watkins seems affronted when I suggest that, until a packaged 90s nostalgia tour with New Kids on the Block in 2015, they’d apparently disappeared – “It seems that’s out there a lot, because we hear that a lot, but I don’t know why, because we never stopped” – but aside from bits of American TV and the odd gig abroad, they’d slipped from public view.

There is some toing and froing between the pair as to why the timing was right to record again. “I was probably the hold-up,” Watkins says. “She stayed ready.” “You know what,” Thomas says, “even when Lisa was alive, all three us were totally dedicated to the group regardless of what you heard. But each person has their own thing in the group.

“I feel like,” she adds, lowering her voice and stretching out an arm towards Watkins, “and I know you’re going to agree, that I’m the heart of the group. I am always ready. I am Team TLC all day long. Not that they’re not…” Watkins shoots her an OTT unimpressed look. “But it’s on another level. You know it is! Come on, sister! You know I’m right.”

Recording went smoothly, even without Lopes, who wasn’t missed in the studio because, Thomas says, after 1992 debut Ooooooohhh… On the TLC Tip, they never recorded together anyway. “After the first album, it was: ‘OK, call me when it’s time for me to do my part’.”

“But you know the hard part?” Watkins interjects. “Coming up with songs that people will like. That’s nerve-racking. When you have songs like “No Scrubs”, “Unpretty” and “Waterfalls”, those are not easy to come by. Then they’re sitting there saying: ‘Well, you better come up with something good like that’. Like, what is this? That’s a lot of pressure.”

The album’s best track “Way Back”, a classy west side groove featuring Snoop Dogg, boasts that the pair “picked up where we left off”. Impervious to current pop trends, like the album itself, it sounds like no time whatsoever has passed in TLC’s world.

“What’s smart about us,” says Thomas, “is we’re smart enough to understand what people love about us. And they love the authenticity: the things we talk about, how we dress, how we perform. We just stick to that formula. The outcome is always going to be a TLC song because of the sound, her voice and my voice.”

I ask if they’ve considered what Lopes might have made of the album. It’s the only time the pair hesitates to speak. “I think that when she was alive…” Thomas says. “It’s that TLC thing. She understood that was us. I think she would have loved the songs.”

Though they will continue to perform – they fancy a Vegas-style residency somewhere – the pair is adamant that it will be their final album. How can they be so sure? “Never say never” says Watkins.

“We might do soundtracks or Christmas songs. We ain’t going anywhere. But a studio album? It’s just not the same. The industry is so different. And some of it is kind of a joke now,” she says, gearing up for a rant.

“Like the superstars and stuff? They are few and far between, the real big legends. Because I think today people use that word ‘legend’ real, real, real, loose. How the hell you been here two years and you’re a legend? I don’t care how popular you are. Reality stars are popular. Who cares? If Instagram went away tomorrow, a lot of people wouldn’t be working. What you going to fall back on, huh?”

The subtext of which seems to be: TLC, against all odds, are still here a quarter of a century on. “And we’re just as strong as before,” Watkins says. “We’ve been through all kinds of life stuff, had kids, marriage, divorce, death. You go through all of that, you can’t help but be stronger.” 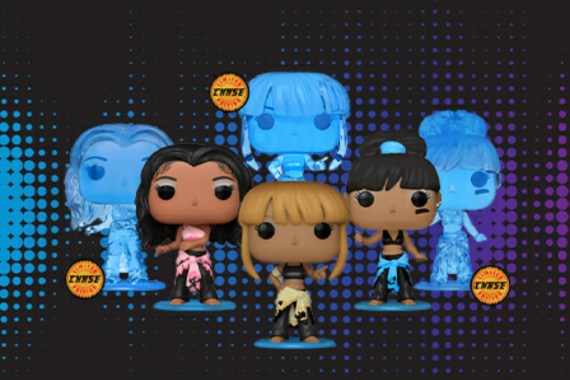